The Garfield Central's mainline extends from an eastern reversing loop at Clarendon Gap to a western reversing loop at Williamsport. The main is double-tracked between each loop. Heading west to east, trains depart the west loop and head thru the sizeable terminal of Williamsport, which features a small yard and engine terminal. Upon exiting Williamsport, trains begin their climb up the stiff eastbound grade, heading across the famous 4-way crossover at "Bohl Crossing". Towards the top of the hill, trains head through a large overhead bridge (literally) before entering Summit. Summit features a few sidings and a small town.

From Summit, trains work their way through Ridge (above and around Clarendon Gap) and then into Georgetown, the major terminal of the Garfield Central. Georgetown features a large yard, roundhouse, engine terminal, and lengthy passing sidings along both mains, making it the ideal crew-change and division point for the GC. East of Georgetown is Bridgeport, a town featuring several sidings and a small station. Next, trains head through the "Subway" which is not a town, just a long and narrow rock cut through which the mainline passes.

The main next wraps around Garfield Courthouse, a rural area with some sidings. East of Garfield Courthouse, "Bohl Crossing" is encountered once again. This time, the train heads across it from the other direction and rolls downhill into Clarendon Gap, the eastern end of the GC. Clarendon Gap features several long sidings as well as an enginehouse and a connection to the Gaskill Mine complex. Finally, the train enters and clears the east loop and heads back west.

Williamsport is a fairly busy terminal, with its own yard and engine terminal, as well as passenger station. There is a long passing siding eastbound, with the yard and other various sidings situated south of the main. Additionally, the west loop of the layout is located at Williamsport. 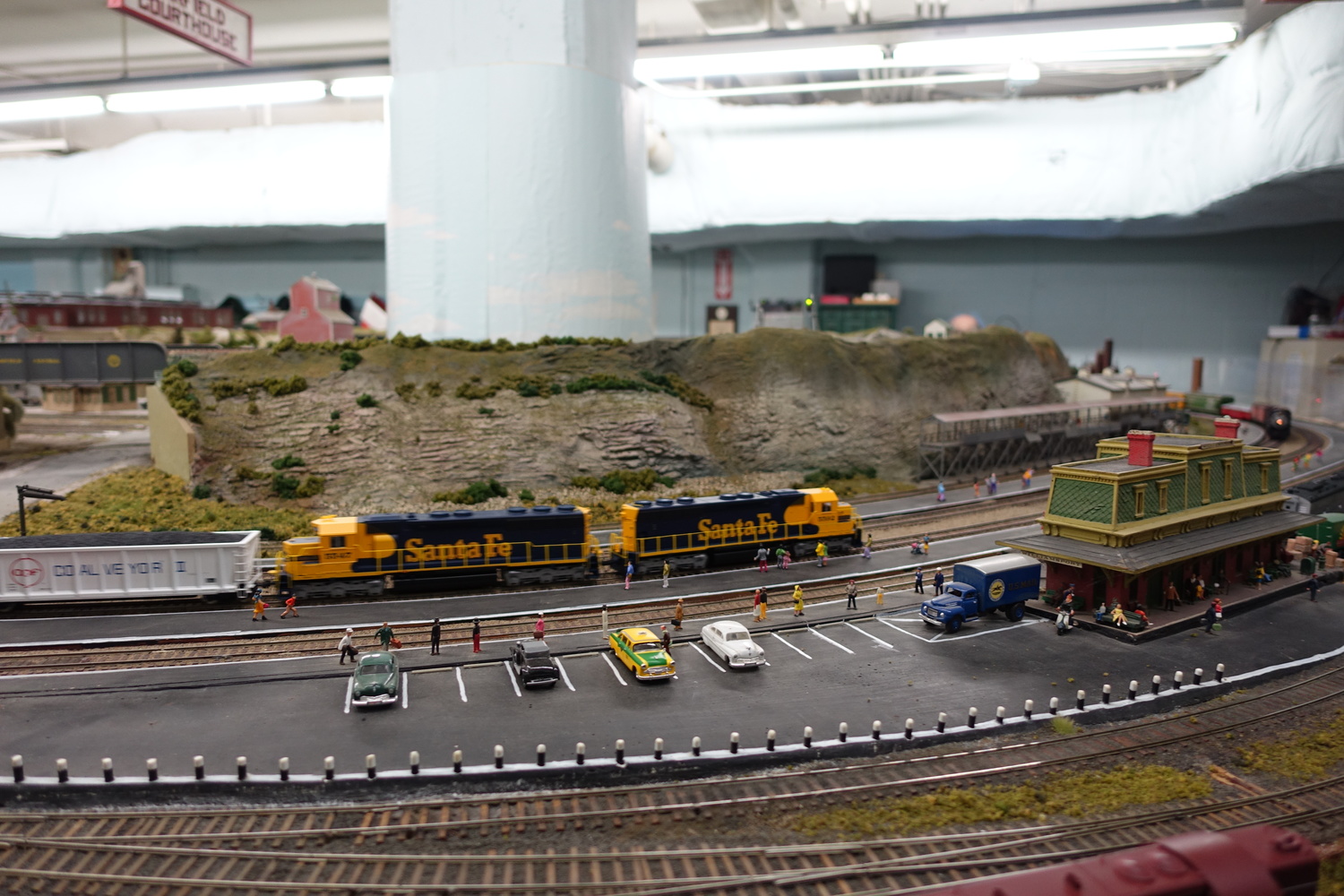 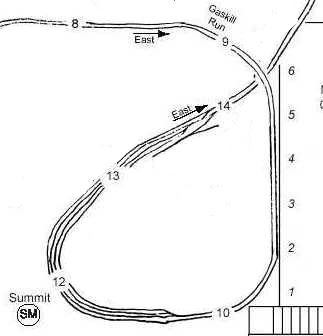 As trains finally reach the top of the long grade from Williamsport, they head over a large steel bridge that marks the entrance. Summit is a bustling town which is used to fast freights passing through. The mainline wraps all the way around Summit, and there are a few industrial sidings as well as an eastbound passing siding.

After trains clear Summit, they navigate a long stretch of mainline railroading until pulling into the West end of Georgetown. 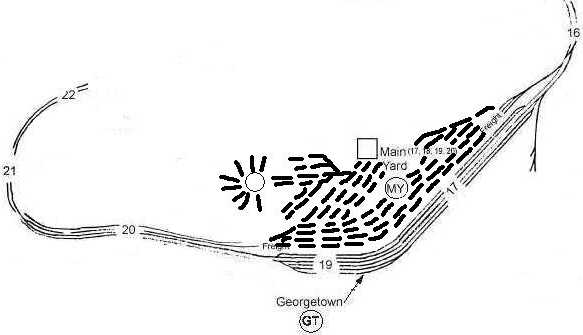 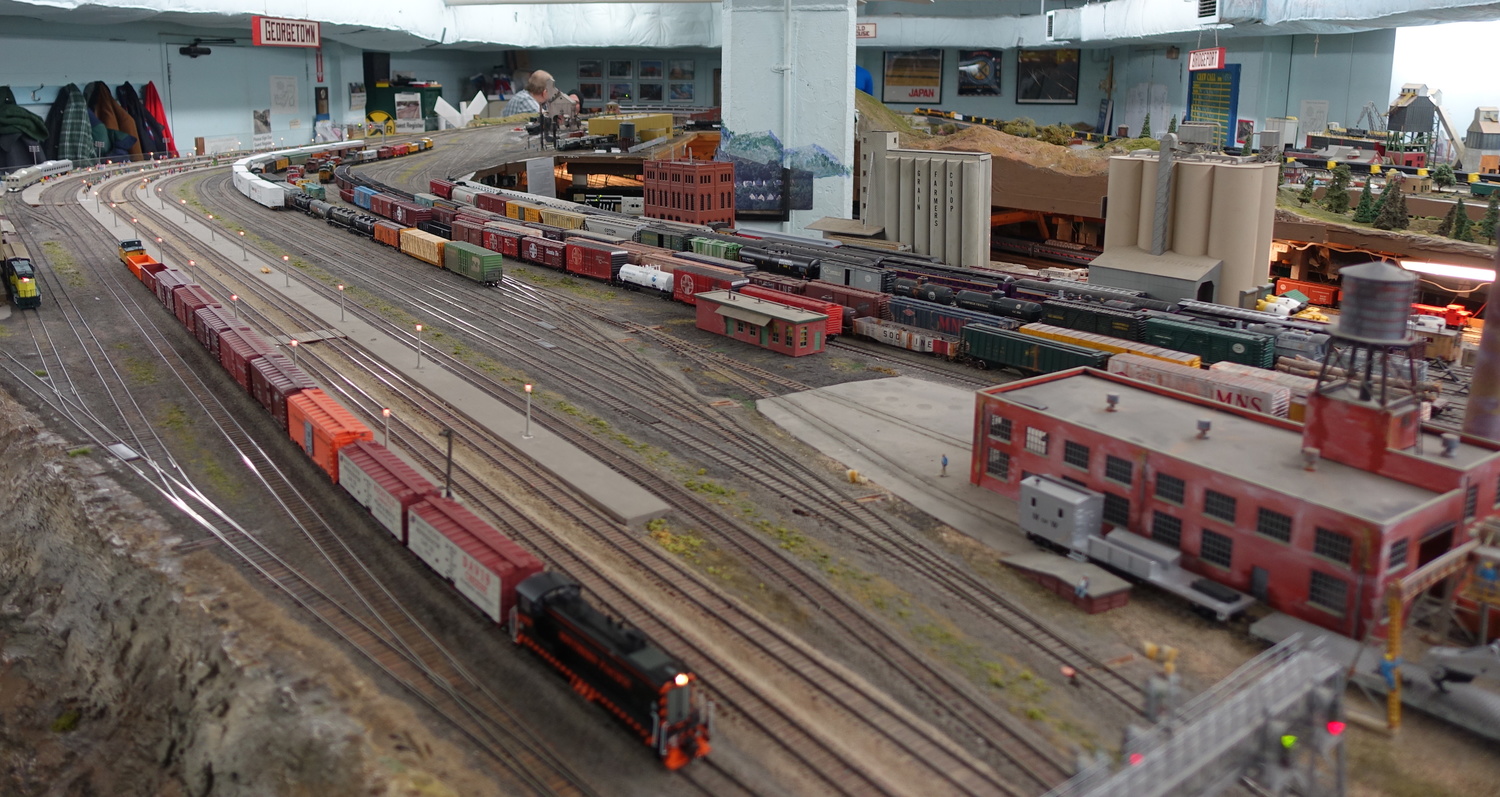 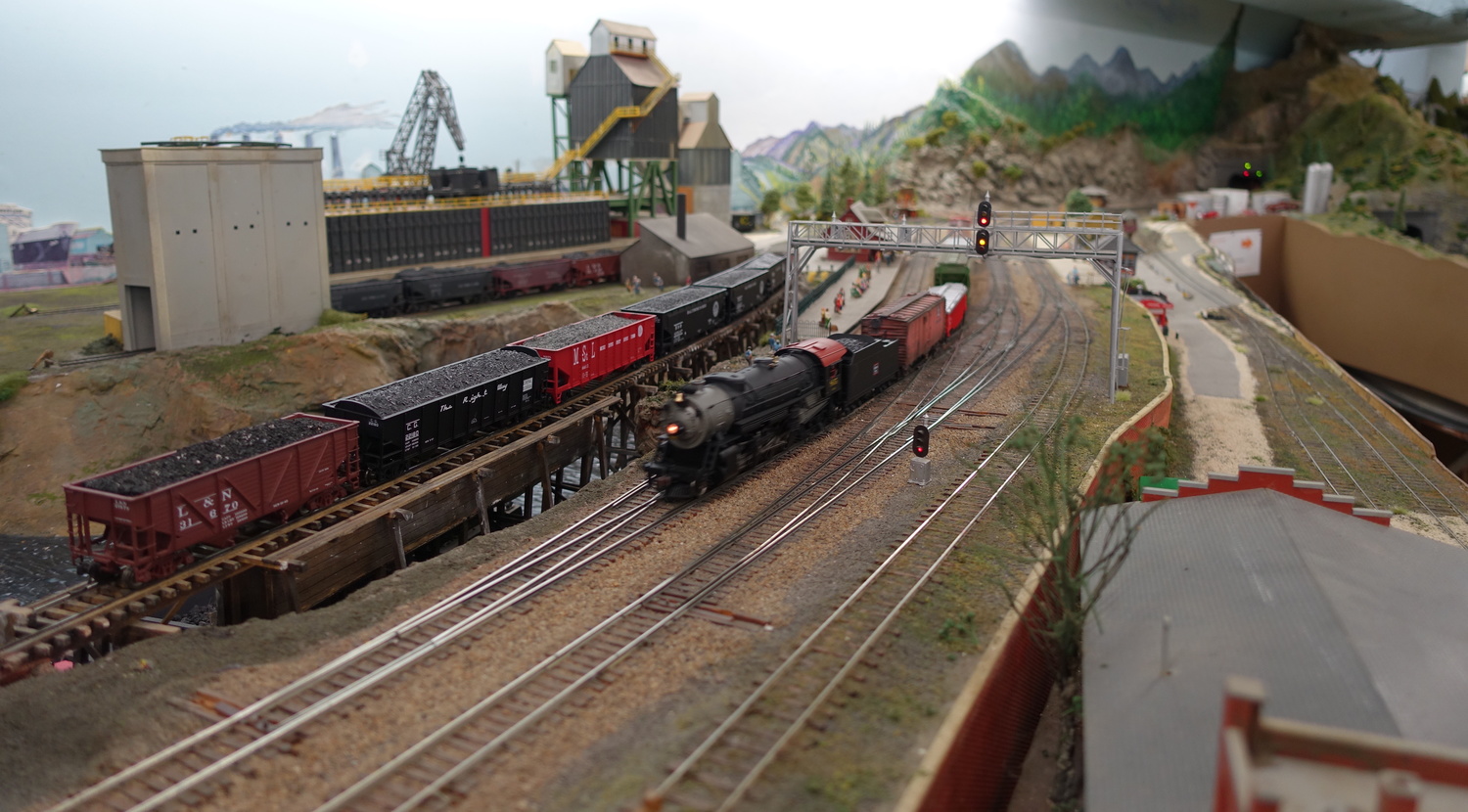 East of Bridgeport, the GC main passes through a long rock-cut, known as the "Subway". This is a popular spot to view trains, since it fronts along the main layout viewing aisle. 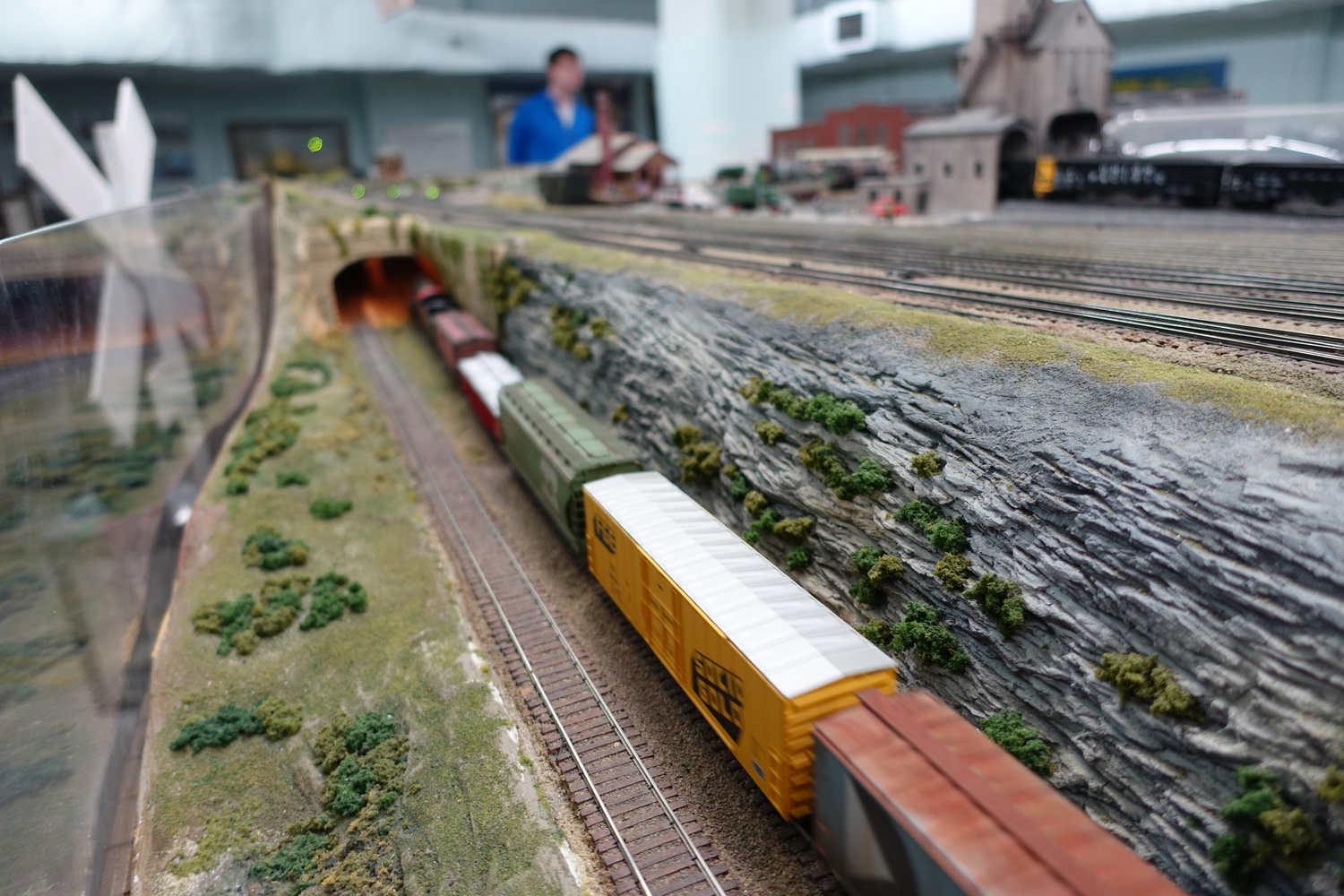 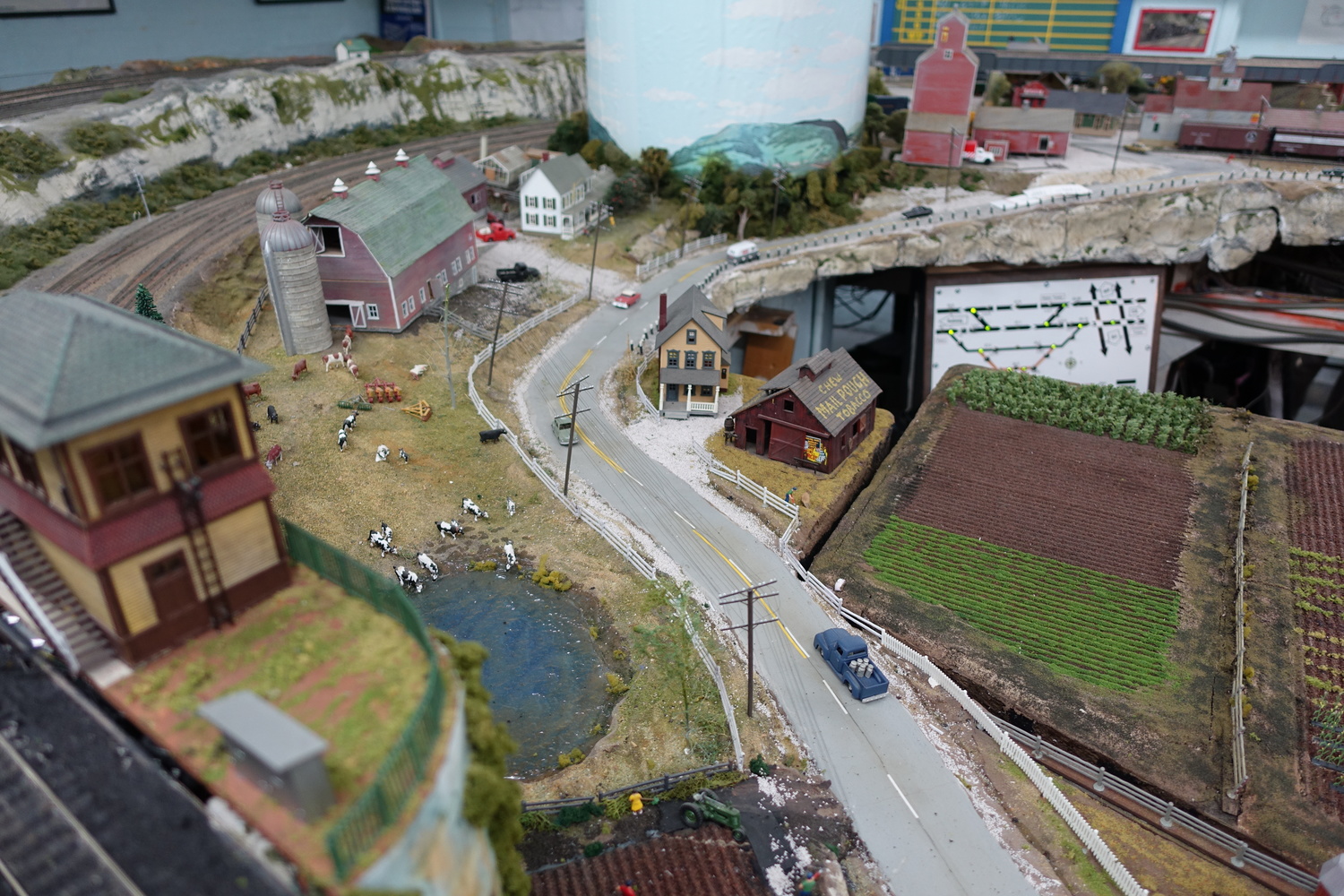 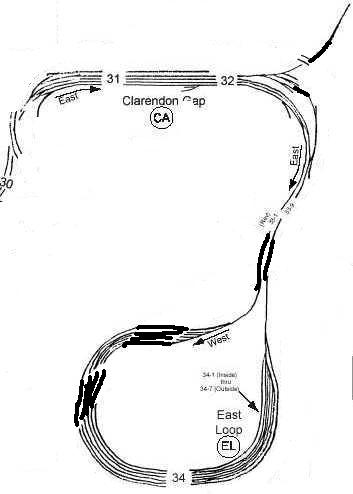 Clarendon Gap is as far east as the Garfield Central goes. This is another small GC terminal, with several long sidings and even a 2-stall engine house that is used to house coal train power between runs into and out of the mine at Gaskill. Typical action at Clarendon Gap consists mainly of coal moving into and out of Gaskill Mine, and there are also a few lineside customers of the GC, such as Valley Lumber Co. 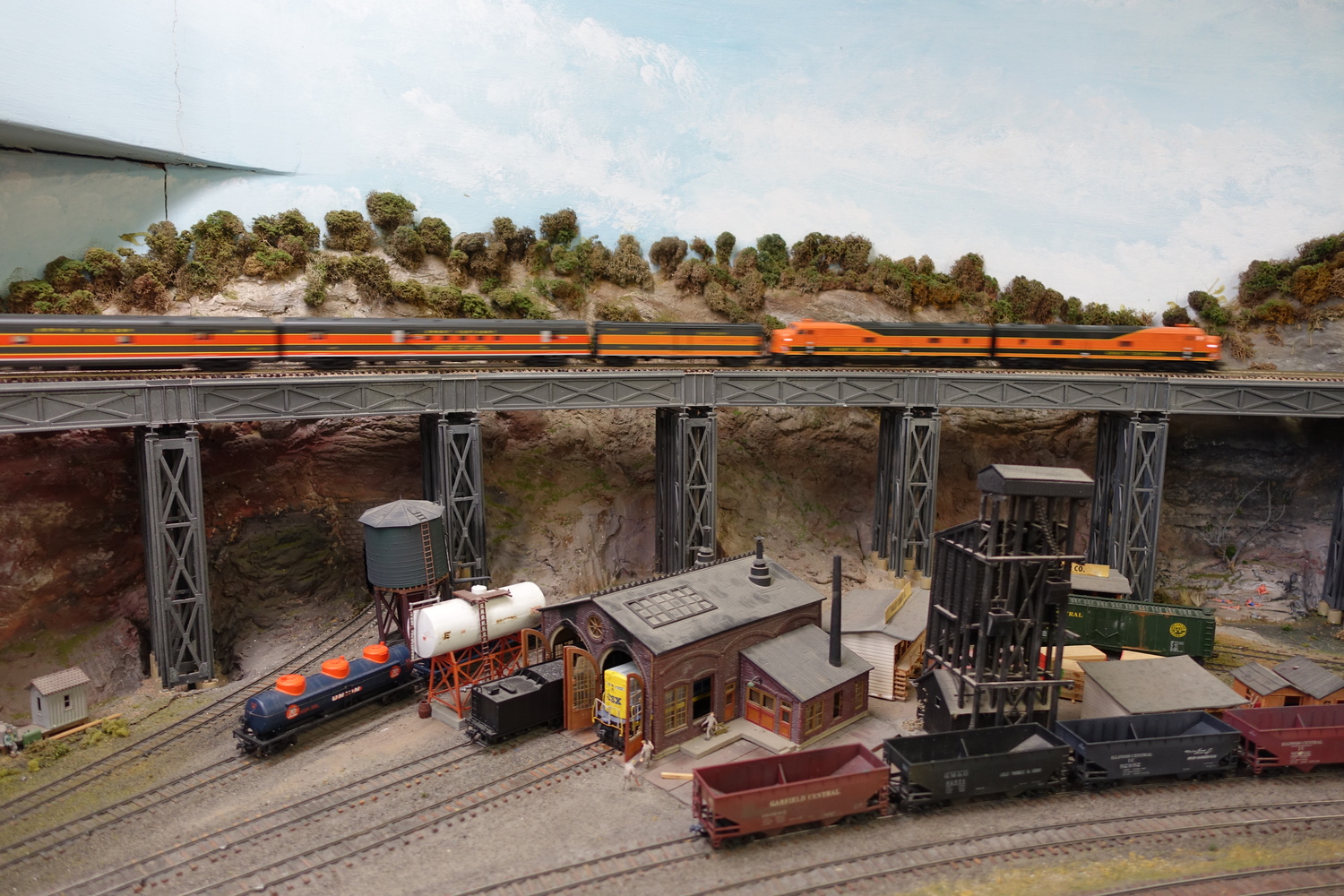 On the western side of Clarendon Gap, a branch line leaves the main and heads into a tunnel. This is the Gaskill branch, which crosses through Gaskill Run on its way to serve the massive Gaskill Mine complex. Gaskill Mine supplies the GC with unit coal trains five to seven times during the typical week.